This interview with Rev. Lottie was conducted on January 23, 2003, exactly a week before the Grand Opening of the Underground Railroad Living Museum and the Angel’s Wind Conference Centre. We had agreed to talk about the process of developing the museum, and about why the project is so important for the church. What follows is a transcript of Rev. Lottie’s story.

The Underground Railroad project grew out of the Detroit 300 celebration. But it is older than that.
When I came to this church in April of 1994, Edith Dempsey, who was close to 90 years old at the time, did the bulletin boards. In February of 1995 Edith did a bulletin board on Black history and this church. One thing she included was a story about a “little lady” (Mrs. Utley) who in the 1800’s reported “lots of activities in the Underground Railroad.” At the time when the church was located on Fort Street and Wayne, she reported, people were frequently hidden in the basement. They would go down from there to take the boat, or ferry, across the river to Canada.
I was intrigue.

Part of the reason I was intrigued was that I didn’t think many African Americans or even European Americans were of the Congregational role in the Abolitionist movement.

I love living museums and historical reenactments. At some point I was down in the area beneath the sanctuary-what they call “the dungeon.” I said, “This could be the Underground Railroad.” Someone said, “This wasn’t the church,: I said, “It doesn’t have to be…It could be a simulation.”

When Detroit 300 offered grants for organizations to partner with it to tell the history of the city I thought, “We could do the Underground Railroad.” We received a grant for $6000. I draw a picture of what I envisioned. The first thing we did was to ask a display company to come and set that up. $6000 didn’t go very far with the display company. 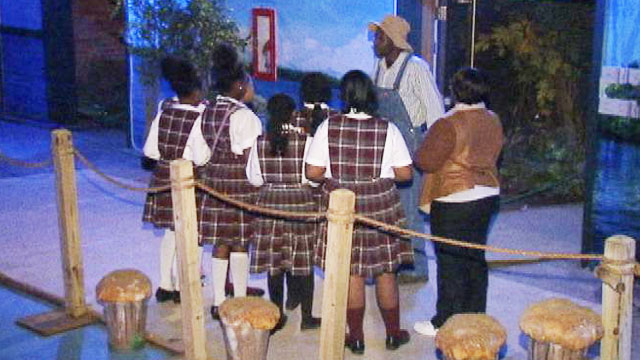 I also did research on the Internet, and purchased books, videos and movies. Moses, about Harriet Tubman, and Enslavement, about the life of a European American woman who was involved in the Abolitionist movement, were both very important.
I found a wall mural, that when I saw it, I knew it was the plantation house. Later, I learned that the mural we had bought was a mural of an actual plantation-the Oak Alley Plantation, in Louisiana-, which I later contacted by phone.
The display company set stuff up, and took it down. A mural of the river, backdrops, sets. It was all expensive. I set about figuring out what we could do ourselves. I created drawings, and platted a course based on the research I had done. I figured out how escapees would have traveled to get from Louisiana to here.

The story is important as part of Congregational history and heritage. But it is a universally important story because it is a story of the civil rights movement. The Underground Railroad was one of the first civil rights movements in this country. It involved people of European descent and African descent. The story shows how God works through people to right injustices.

Other people got involved because I always talk about what I am thinking about, and dreaming about.

This was an idea whose time had come. I have had ideas that people did not respond to. But they responded to this one. It caught peoples’ imaginations.

In the Underground Railroad story, instead of using puppets to tell the story, the people tell the story themselves.
I envisioned each stop on the Underground Railroad tour as a learning center. For each stop, Granny Franny’s cabin, Junebug’s carpenter shop, the river clearing, the Quaker safe house, the church, Finney’s barn, the Detroit River, I identified teaching goals. This is what I want people to learn from the center. Each actor had to know the teaching goals. Each one received a packet with information about slavery. But, they did not get scripts. They received instructions about what they were to convey. Each person developed his or her own character’s story. 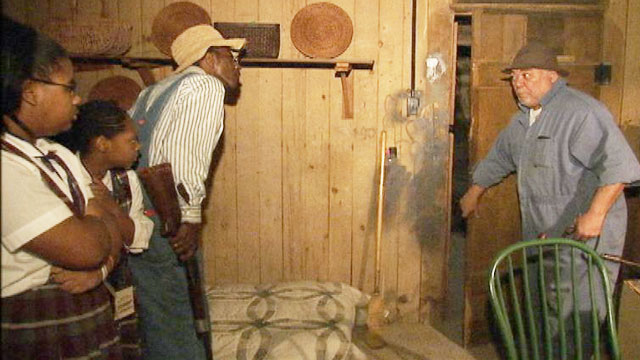 The biggest problem in working with the cast is conveying the importance of staying in character, of not slipping into the third person narrative. The next biggest problem is that once they get it, they don’t want to stop. The individual characters have a way of wanting to expand their parts so that they become the whole tour! Creativity can be problematic.

What makes us in the image of God is our ability to create.

I made the vision clear to them. They had a picture, a plan of what I was talking about. I described how to make columns into trees. We ordered leaves on the Internet, pulled branches from fallen trees in vacant lots, bought huge sheets of black plastic at Home Depot that were used to create tunnels and backdrops. We purchased murals and found ways to fix them to fabric. Every one of those murals that make the forest-DeBorah did those.

A member of the church built the wagon. So was the split rail fence,. Trees were purchased from Franks. The alligator in the swamp was purchased from a landscape company.

I made the picture clear, and we made a schedule. Then I went away to a conference with Harold. I kept calling and asking, “What are you doing now?” When I came back they had it up.

This experience has been for me one of the greatest material witnesses of the creativity of God working through people. It has been a labor that everyone can get involved in.

As they do, it’s a learning process